The collar turned out to be insanely large. While it looks somewhat decent from the side, I hate what it does from the front. It reminds me of sash-shrugged prom dresses, like it’s eating my head. This really annoys me, as the pattern page doesn’t have a single picture of what it looks like from the front. The pic below is the only one from the front, and you can’t see the collar at all! 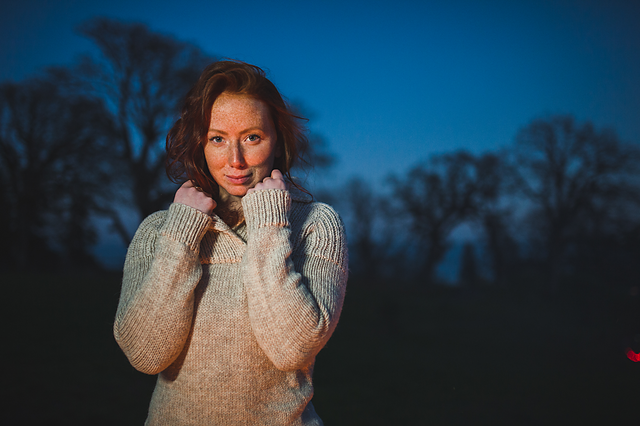 So a strike against the designer on that.

It technically fit. Technically. Mostly neutral ease, maybe a bit bordering on positive ease at the stockinette portion. But that’s not really the problem. The problem is the size of my chest. And how that changes the fit of things from those with smaller chests. Particularly when combined with my relatively large shoulders…

If I had to choose a worse spot for a collar join to be, I don’t think I would be able to. Directly across the biggest part of my chest. Collar adding even more bulk to my shoulders. Just unpleasantness everywhere.

Now, if you look at the pattern picture from above, you’ll see that it’s nowhere near close to bisecting her chest. I believe this is for two reasons: hers is just smaller in general, and that the way this pattern sizes up is not super fantastic… Which leads me to:

The way the pattern is laid out is really cool. There’s a chart at the beginning with all the sizes (28-48) and the numbers for each part of the pattern you’ll need. Instead of having to go through each spot that there’s a number and highlighting yours, you grab it from the chart and write them in along the way. It makes for a much more easy to read final pattern to work from. But there’s a couple of spots in the sizing that just seems off (same number of increases and decreases for all sizes, for example). And I find this is shown really well when you look at the FO’s for the pattern – All the ones in smaller sizes look “right” and larger sizes look off. I know there was one spot that it says to go until n inches after you finish an instruction, but it was already over an inch longer than n by the time I finished that part. I can’t recall what it is right now, but that might’ve contributed to the weirdness that is this half-FO.

I switched over and did a sleeve once a finished the ball I was working on for the body. I know that sleeves can change how yokes fit, so I gave it a try. Absolutely no difference at all, as pulling the collar up to not join directly across my boobs made it look like it was eating my head even more. If I pulled it down so it was crossing under my chest, it sat weird across the shoulders and gave me droopy armpits. It really wasn’t salvagable without major reworking and I hated the collar enough to call it quits and try something else.

This is getting frogged and the yarn will be used for a Bulky Weight Ease. Coming soon to Tuesday Queuesday 😉

Not actually human, am knitting machine.