It’s done, it’s done, it’s finally done!  This is my finished Afmaeli, knit out of the Léttlopi Glenn got me on his October trip to Iceland.

When I finished this up in the first couple days of December, I was actually surprised to see I had only started it on October 28.  It seemed like I had been working on it for a lot longer.  Maybe because of that thing where I put it down for a week or two and camped out on Sleeve Island.  I was worried about the fit when I tried the finished piece on before blocking because the sleeves seemed a couple inches too short.  However, when I blocked it I stretched the sleeves lengthwise as much as they could and they now fit perfectly. 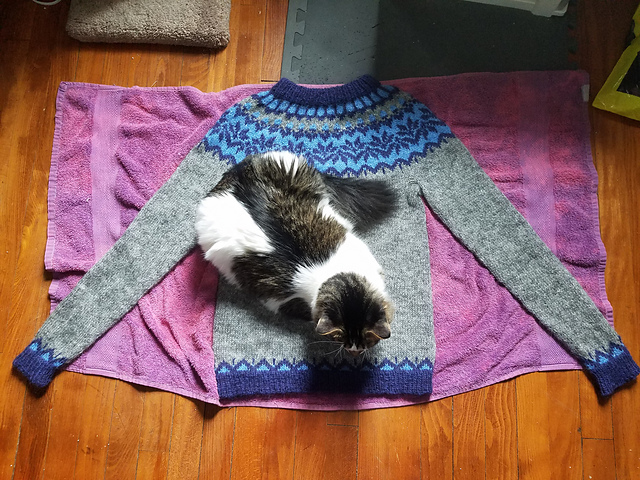 I’m really pleased with the fit (I didn’t make any modifications) and I have worn it twice so far since finishing it.  In true Icelandic wool form, it is very warm.  Glenn and I took a late-night walk in the snow the first time I wore it and I went out in the sweater and a down vest, but no jacket.  I stayed warm and dry, even though the sleeves had snow and ice on them when I came back inside.

I have worn it with a short sleeve shirt under it and with a tank top under it.  I’m not particularly sensitive to wool so I don’t find this so scratchy that I need to wear a long-sleeve turtleneck under it like some people have suggested.  For me, scratchy wool is one of those things where if I ignore it, it goes away, since I don’t have any allergies to it or anything like that.  I also put conditioner (yes, the kind for human hair) in its bath when I blocked it, which probably did soften it up slightly.