FO Friday – Water for the Elephants

It’s no secret that I really like elephants.  Early in my knitting career, I saw the Water for the Elephants pattern by Yvette Noel and knew that I needed to knit it.  This was before I was knitting with wool yarn, before I had knit ANY socks (I think I got a worsted weight sock past the heel turn first), before I knew about magic loop, etc.  But I’ve always been a pretty fearless knitters, so, stranding? No problem.

Yes, problem!  I held one strand in each hand and, as an English knitter, this was my first time knitting continental style.  I wrapped the yarn in the wrong direction with my left hand.  The pattern called for two circulars or DPNs, so I bought a set of US1 DPNs and a single 16″ US1 circular needle.  I quickly figured out I wouldn’t be able to use the circ, but I knew I could convert the pattern to be on DPNs, so I did.  The only problem being that, where the pattern mentioned “needle 1” and “needle 2” referring to the two circular needles, I thought that also referred to the DPNs and used only two, with a third working needle! 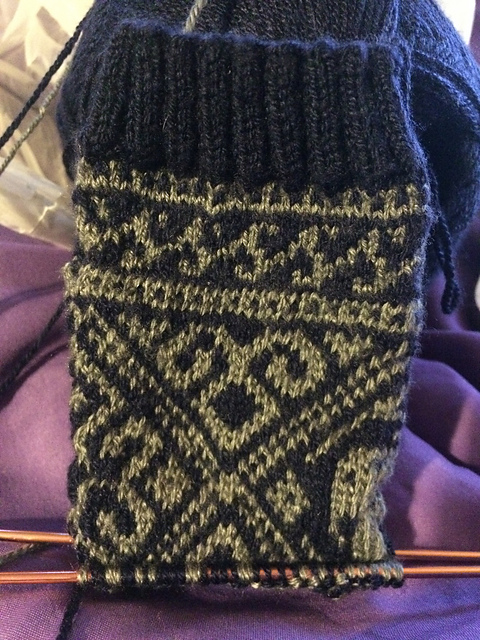 Somehow I managed to get this far using only three DPNs.

You can imagine where my first Water for the Elephants socks ended up: the frog pond.  But not before I actually got past the first heel, tried it on, and realized there was no way it was ever going to make it over my heel. 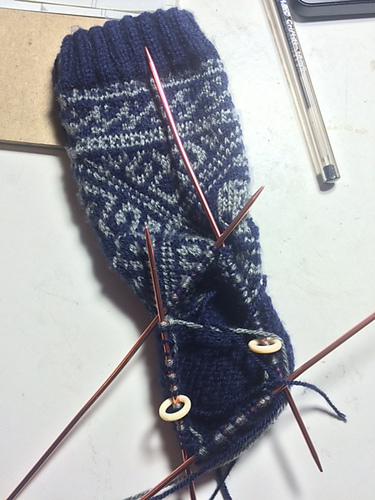 I was about here when I put them in hibernation and later frogged them. As you can see, I did figure out about the number of DPNs issue.

I lost steam after realizing they weren’t going to fit, stuck them in hibernation, and eventually frogged them.  I still have the yarn, but it is Loops and Threads Woollike and I do not know if I will ever find something to do with it.  After this relative disaster, I decided to work my way up to knitting these socks and very sensibly bought real wool/nylon sock yarn to knit my first pair of plain socks.  Not so sensibly, the yarn was single ply and they felted after one wash, despite being superwash. 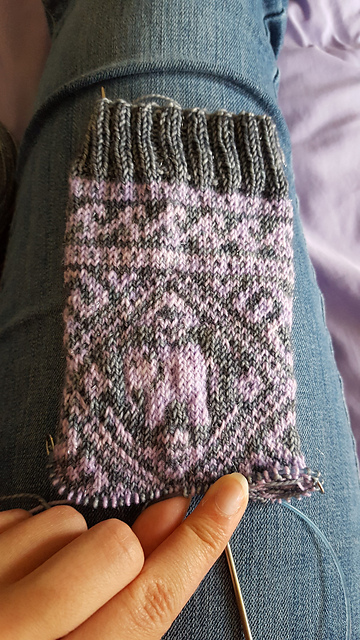 Well, as you know, despite early setbacks, I have become quite the obsessed sock knitter.  Water for the Elephants remained my “holy grail” of sock patterns I wanted to knit someday, and early this year I decided 2016 would be the year of the successful elephant socks.  I cast on in the beginning of May with some yarn I had dyed for a shawl that I decided not to knit: What the Lump and Steelworks on my Sequoia Sock base.  I still hold one strand in each hand, but now I know how to knit continental correctly.  I worked on them slowly but steadily and finished in about three weeks.  I decided to invert the colors because I couldn’t decide which color would be better as the contrast and I’m glad I did because I love the effect.  I rarely block socks, but I did block these to even out my colorwork tension. 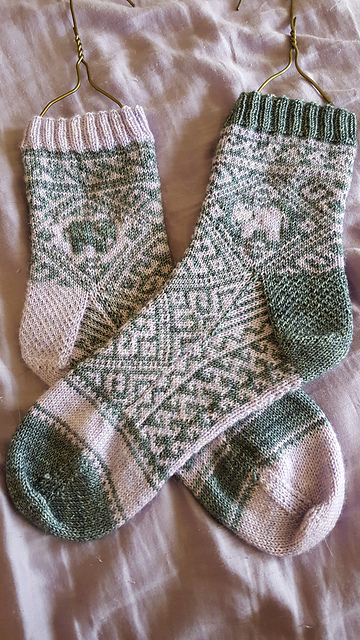 Most importantly of all, they fit! 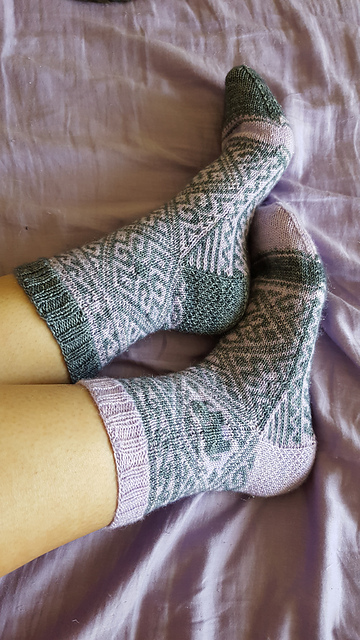 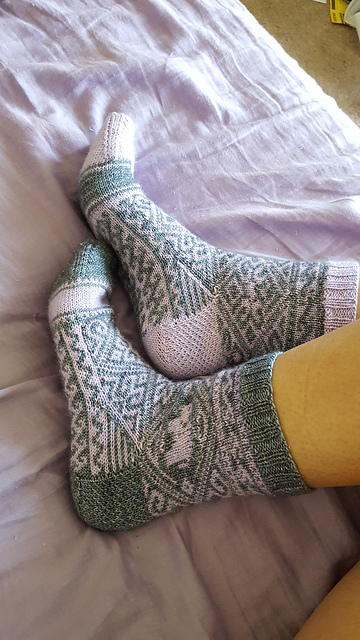 I thought this pattern was well-written and easy to follow.  I had downloaded it back when it was still free, but it now costs $4.00.  I would say it is definitely worth the money if you are thinking about purchasing it.  One of the things I really liked was the fact that the pattern included a place to add or subtract rows before the toe to accommodate foot length.  I have fairly long feet (I wear a US women’s 11-11.5 shoe) so I frequently modify sock patterns for length.  This allowance in the pattern was helpful.

The charts are easy to read and free of errors.  I found it helpful to use my laptop to read the charts and draw a box in my PDF viewer that I could move up as I went to cover the parts of the chart I had already knit.

I am not excited for it to get cold, but I am excited to wear these once it does get cold!