Back in December of last year (2015), I knit a pair of socks for myself out of a skein of yarn I had bought on vacation in Traverse City.  They were the umpteenth pair of vanilla socks with a Fish Lips Kiss heel I had knit myself, but they were the first I tried knitting on a size US0 needle–my go-to is a US1.  Because my row gauge was tighter on the smaller needle and I used the same number of stitches for the heel that I usually use with a US1, the heels ended up too shallow.  The heels would keep falling down under my foot because they just wouldn’t cup my heels properly.  I don’t have any pictures of them on my feet for some reason, but here they are on sock blockers. 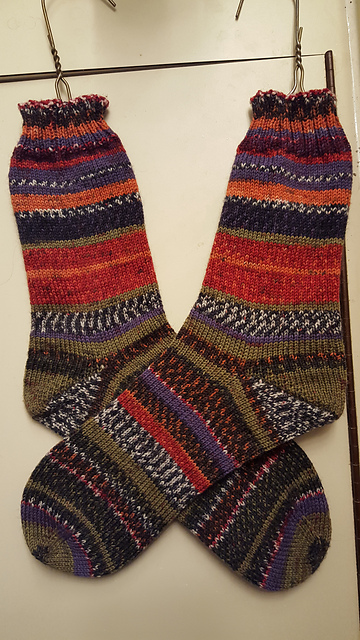 The socks before replacing the heels. I know you can’t actually tell anything about fit from this picture. 🙁

I tried to wear them a couple times, but they were straight-up uncomfortable with the heels as they were, so they went in the naughty pile.  I had the idea that I could cut out the heels and replace them with afterthought heels and did so for one sock last winter.  It was a success, but I didn’t feel like doing the second sock just then, and they ended up in my To Repair pile for months after that.  This morning, I was thinking that it might be nice to have a new pair of socks, remembered about this pair, and pulled them out to finally replace that second heel!

This is not a tutorial, but I thought it would be fun to share what I did and maybe it will help you if you ever come across a similar issue.

How I Replaced the Heel

On the left is the original FLK heel. On the right is the afterthought heel I’m replacing it with.

I started by inserting a size US0 needle into one leg of each stitch a row or two down from the heel, all the way around the sock.  I wasn’t too concerned with making sure they were all from the same row because I knew I could fix it later.

The next part was the most fun.  I took some little scissors to it and snipped out that old heel!

Once the old heel was out, I had to pick out the remnants of the cut stitches.  Here is what it looked like before:

Before picking out the remnants

As you can see, now there are long bits of yarning hanging about.  These are because I picked up some stitches a row lower than other stitches.  I slipped stitches around on my needles to be able to tink all the stitches down to the same row.

The final problem to solve before I could start knitting the heel was to close up this gap at the corner (and the other gap in the other corner).  I joined new yarn and picked up two stitches in each gap as I knit one row, still using the US0 needles.

After closing the gaps, I switched to US1 needles so I wouldn’t have the same depth issue as the original heels.  I knit a fairly standard afterthought heel, doing additional decreases on the first round to get rid of the extra stitches picked up at the gaps.

I knit until 20 stitches remained, 10 on each needle, grafted, and wove in the ends.

And from the side

It had been so long since I did the first heel that I couldn’t find the right part of the yarn to make the heels match, but I care absolutely not at all about that.  They fit!  I love the depth of the new heels and these socks can now finally get the love they deserve.