On being a brave knitter

This is a hard post to write without calling out individuals, so I’m not going to. Instead, I figured the three of us here could collaborate on the post and give you our individual takes on the topic. So you still get to see multiple perspectives, but we don’t have to feel like mean girls.

It’s common in crafting to hear a refrain like “I haven’t tried [technique] yet, it’s way too hard,” or “I have to practice my [stitch] before I can do a whole project,” or even “Look at my very first use of [element]!”

What do we think of this hesitation in knitters attempting new techniques?

I first learned to knit at the side of a pool the summer after 4th grade from a friend’s mom.  She taught me the backwards loop cast on and the knit stitch.  I proceeded to knit a jagged garter stitch “scarf” the rest of the summer.  I picked it up on and off after that and eventually took a class after school for like six weeks in high school with an older English lady.  She basically taught me the long-tail cast on, reminded me how to purl, and set me loose with a pattern to knit some garter slippers and stockinette mittens, both knit flat and seamed.

Maybe it’s the fact that I had to seam my first pair of mittens or that I have been mostly self-taught, but when there is a new-to-me technique in a pattern, I know I will figure it out.  I’m not afraid to mess up–one of the great things about knitting is you can always rip it out and try again.  That has resulted in mostly success, though one notable semi-failure was that time I tried to knit stranded socks on two DPNs without having knit socks or done colorwork before.

But I also knit a pair of pretty sweet tipless gloves for a friend, and this is what I wrote in my project notes for them:

I made these gloves in November 2014 for a Christmas gift. These were my first time using dpns! The gloves worked up quickly and were easy to make. I am not a fan of the lateral braid stitch used in the pattern, which is why I gave it four stars. The stitch is easy and looks nice, but it took me forever and was very annoying, while not looking nice enough to outweigh those drawbacks. I’m happy with how these turned out, though, and I hope they will be well-received. 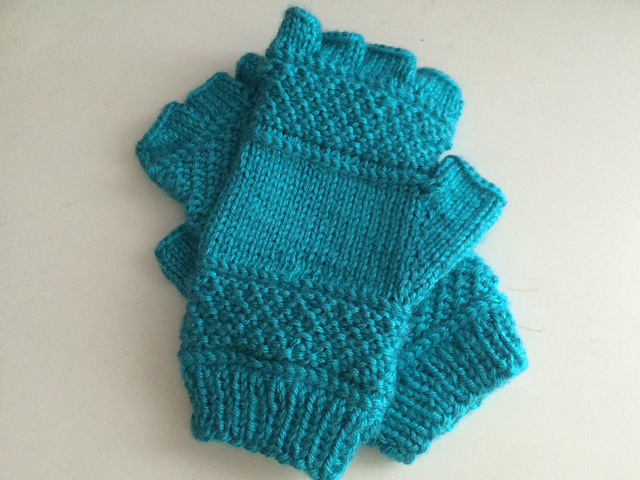 I didn’t know using DPNs was supposed to be hard or intimidating and I certainly did not know that this “lateral braid” was expected to be challenging.  I chose the pattern because I liked it and it was free.  I tried lots of new things and it worked out just fine.

I always say that nothing in knitting is hard if you know how to read and follow directions, especially if you aren’t afraid to mess up.

Amanda’s Take (I didn’t know I wasn’t supposed to do that):

I don’t think of it as hesitation, I think of it as a lack of empowerment. I have really appreciated the knitting writers and pattern designers who phrase knitting purely in terms of the basics, where you can very nearly boil everything down to knits and purls.

I learned to knit in a classroom setting, which made me braver than I might otherwise have been. My first real project was a tea cozy in the round.

Ribbed and Ruffled Tea Cozy from Churchmouse Yarns and Teas

And while my beginner mistakes are very evident in the end result (twisted knits, anyone?) I chose this pattern because I didn’t realize I was supposed to hate ribbing, that “in the round” was somehow scary compared to flat, and because I really wanted a cute tea cozy. I bought yarn recommended by the shop owner where I learned, although now I realize it was not quite the right weight for the pattern. I learned decreases, how to tidily split the sides of a tube, then rejoin, and I-cord, all because I didn’t know it was supposed to be hard.

Sometimes I think that we handicap new knitters because we tell them they should just do a scarf, or practice knits and purls before they are “allowed” to do anything else. The culture of knitters can be overwhelming and opinionated, and telling people what is and what isn’t hard is just detrimental to their personal learning experience. Asking people to define themselves as a “process knitter,” or telling them “everyone hates purling,” or maybe even “scarves are boring,” just pre-disposes people away from their own knitting power.

I was a long time crocheter. I started early enough in life (Ravelry says high school, I don’t actually remember) that I have no idea what I made or how it turned out. I remember making god-awful scarves in college. After college I made some blankets and amigurumi, but nothing very exciting.

I learned to knit after I moved to the west coast (again) and was peer pressured into it by a soon to be very good friend. I went from “I can’t knit at all” to cables, lace, in the round, decreasing, increasing, colorwork, two at a time, and magic loop all within a couple months.

My first project was a lace and cabled hat, and subsequently matching gloves. What, is this supposed to be hard? Am I supposed to be intimidated somehow? I just really wanted that hat. 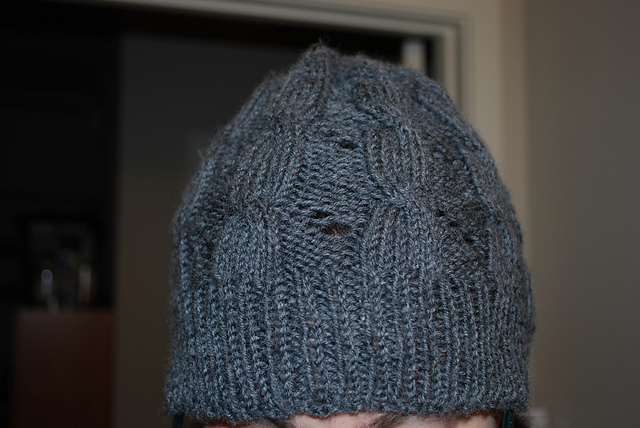 My enabler was a sock knitter so it took me 13 days from finishing that hat to doing two at a time, toe up, short row heel socks. What can I say? I decide what I want and I do it. Don’t be afraid of failure, because if you don’t try you can never succeed.

federally employed, married, 2 dogs, and like, so into pumpkin spice