When You Didn’t Know a Color was Your Color

My color is purple, tending toward maroon.  I also dig black, if we aren’t being too technical about it.

I have a Featherweight Cardigan in a beautiful teal blue (KnitPicks Capretta in Harbor).  I’m pretty sure I picked the color because it was on sale.  It is my “goes with everything” sweater (or WAS, more on that in a later post) and I definitely wore it with many, many outfits. 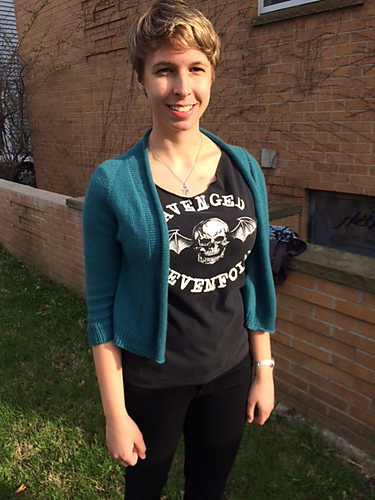 I recently modified the Featherweight pattern to be a bolero in order to work with a wrap dress I sewed with a side tie closure.  One day, while I was working on it during a social event at work and wearing my original Featherweight, a coworker asked, jokingly, if I was knitting on the thing I was wearing while wearing it.  I looked down and sure enough, the beautiful Tell Tale Yarn Sailor Sock in Fathom that I was working with was a pretty close match to the cardigan I was wearing, the only real difference being the Sailor Sock is a hand-dyed tonal.  Okay, these are based on the same pattern but will be two very different garments, so it’s cool.  Obviously the blue-green goes with enough of my clothes, since I wear OG Featherweight so often, that this bolero is bound to be a success.  Right! 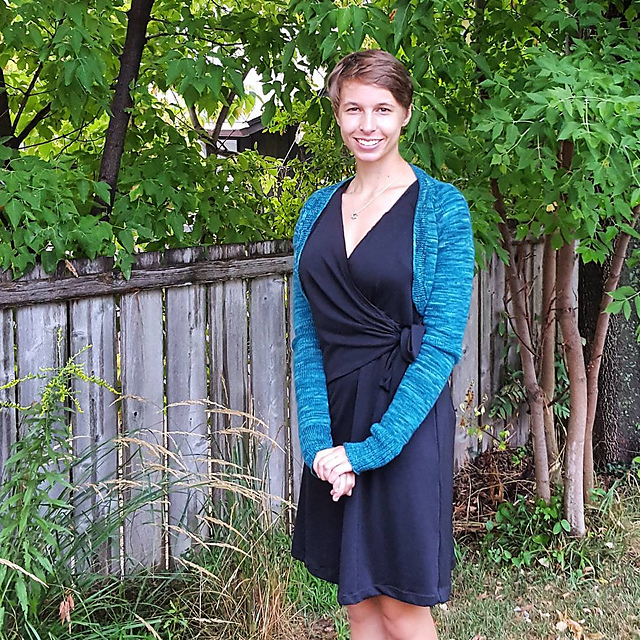 My outfits have gotten classier. (The colors of the two yarns are much closer than differences in light allow.)

While the bolero was still a work in progress, I went on vacation to British Columbia, where I visited the SweetGeorgia Yarns studio in Vancouver.  I picked up a sweater quantity of Tough Love Sock in the Evergreen colorway.  I thought I would make myself a nice green sweater, since I didn’t have any nice green sweaters.

Well, as it turns out…

A couple weeks after I finished that bolero, I excitedly cast on for a new sweater in the SweetGeorgia yarn.  I have a thing for knitting striped sweaters by Amy Miller without the stripes, so I got started on Signature Stripes without the stripes (I’ve also knit her Sperry pattern in a solid).  I was knitting on that at a staff meeting recently and that same coworker looked at me and said, “There you are knitting in your color!”  I wasn’t even wearing either of my versions of Featherweight.

My color is purple, damn it!

Bonus nighttime picture of JJ on my WIP because it appears to be the same color as my sheets, too. At least my boyfriend chose those.

Battle of the Bras

Fall Mini Capsule – Everything Else ;)