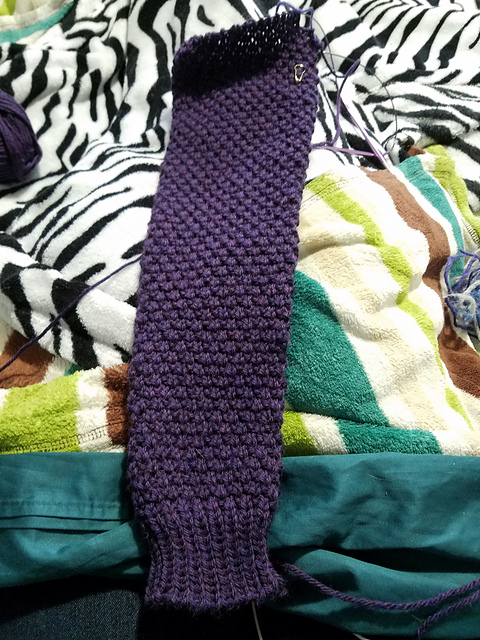 I wrote last week about my never-ending sweater queue and how I had moved Thermal Tunic up to the front of my queue in light of my recent leggings purchase.  After finishing my previous sweater (look for an FO Friday post about it later this week!), I was able to cast on for Thermal on Saturday (here is my project page) and I spent a good part of my weekend on it.  I decided to start with the sleeves this time in the hope that it would keep me off Sleeve Island, and it worked!  By the end of the day on Monday, I had two sleeves ready and waiting for a body to attach to. 😀

I have been working monogamously on this since I started it and am now several decreases into the body (it is knit bottom-up).  I am knitting the 35 3/4″ size, but adding three inches to the length so it actually covers my crotch (based on the specs in the pattern, it won’t) and modifying it to be more fitted through the hips and waist.  I am a little worried about having enough yarn since I am adding length and I only bought the recommended yardage, but I think the modifications I am making to make it more fitted will cause the stitch count to even out to be about the same as if I were to knit it as written.  I did the calculation and it seems to work out, provided I didn’t go about it wrong.  I’m hopeful at this point.

I’m trying to finish as much as possible this week before I have to pick up my gift knitting again and get that finished, which I’m sure will happen before this sweater is complete.  Progress on the sweater is feeling really fast though!  I’m sure it helps that I have only knit on this the last several days, whereas usually I switch between projects depending on my mood.  It’s great TV, reading, or meeting knitting, too, because the stitch pattern is very simple and I mostly don’t have to look at it.  I also had to go all the way up to US9 needles to get gauge (the pattern recommends US7).  The largest needles I’ve ever knit a sweater on were US8 and my last sweater was knit on US6, so this feels like it is absolutely flying. 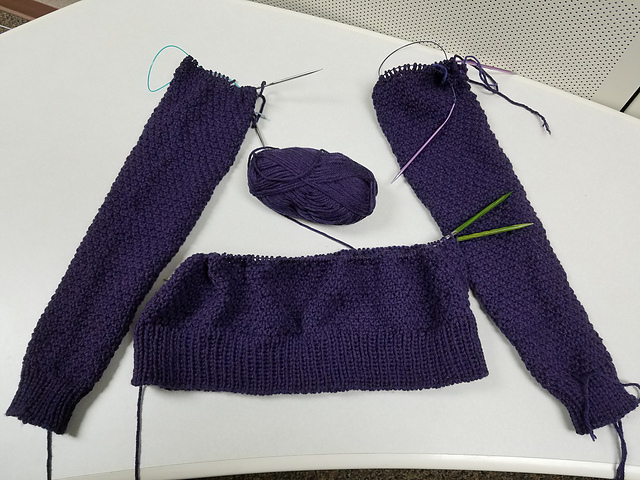 That brings me to my swatching for this project.  I tend to half-ass my swatches, unless I’m swatching for a new design.  Here’s how I half-assed this one!

The pattern calls for 17 stitches and 26 rows to four inches in Thermal Stitch (a stitch pattern defined in the pattern) and the recommended needle size is US7.  I knit my first swatch on US6, since I end up knitting a lot of sweaters with that needle size.  I cast on something like 36 stitches, joined in the round, and immediately went into knitting the Thermal Stitch pattern.  Normally I would knit some garter or ribbing, but the pattern has enough purls that it doesn’t really curl.  Normally, I would also knit the swatch flat, sliding every row to knit every row on the right side, then I would cut the yarn in the back to end up with a flat swatch that was knit in the round.  However, since I a) am lazy and b) only bought exactly enough yarn, I didn’t want to waste any by cutting it.  So, I knit my swatches in the round.

With the US6, I knit maybe 6 rows, measured the stitch gauge, and could tell I was way off.  I was getting 24 stitches to 4 inches.  So, size up!

My US7s are in a project and I didn’t want to take them out, so I went up to US8, hoping that wouldn’t be too big.  I ripped out my swatch, cast on 38 this time, and knit away!  After several rows, I measured 20 stitches to 4 inches.  I decided to just go ahead and cast on the first sleeve with US9, figuring one more size up would be the closest I would get to 17 stitches per 4 inches and not wanting to swatch again.

I cast on and worked the sleeve as specified.  Once I had finished the ribbing and done a few repeats of the stitch pattern, I measured and I was pretty much spot on.  I think I even matched row gauge!  I guess that’s what happens when you use the recommended yarn.  So I did all my modification calculations based on the pattern gauge and I’m holding out hope that I didn’t manage to screw up my not-so-careful measurements. 🙂

You might be thinking, “but Rachel, aren’t you supposed to block your swatches?”  HAH.  Yes.  Yes I am.  And no I didn’t.  I don’t think I have ever washed and blocked a swatch for a sweater.  Maybe once.

Like I said, if it’s not for a design, I am laaaaaazy.